One From The Boys: Silk in the Raw {also, My Tie Love Affair}

My love affair with beautiful neckties is ages old, cherie, and I definitely think it began in my formative years.  The fact that my father wore a suit and tie every day served to transform the necktie into a powerful symbol of maleness and there is nothing I like more on a man.  Even when he’s in casual dress, the addition of a tie will make me look once, twice, thrice.  (Tie and glasses?  C’est Fini!)

In college, I worked as a sales clerk in men’s suits in a large department store one Christmas season.  The crowning glory?  Ties upon ties upon ties displayed in a rainbow wheel of silk on circular tables, susceptible to complete dishevelment at the lightest touch from passersby.  That table was a labor of love for me.  I lost myself in the pursuit of perfection while my co-workers steered clear, endeavoring to look busy as they futzed over already-tidied merchandise.

While I’ve definitely given more Hermès than I’ve received — I’m looking to rectify that, d’accord! — I’ve become something of a tie collector and I enjoy wearing one frequently.  (Sidenote: Isn’t it more than a bit unfair that a woman in a tie is viewed as more casual, whereas a man in a tie is automatically considered more formal?)  I tend to favor a skinnier tie and usually employ the military tie tuck to keep from looking too Annie Hall.  My best tie tip for the girls is that most of us can get away with wearing a boy’s tie — just look for the longest length available.  Brooks Brothers Fleece ties in a size 50 are perfect.  Added bonus: when they go on sale they run about $16.

As spring approaches, I’ve been hungering for a few new ties and Lawrence over at Sartorially Inclined has clued me in to what just might be my next move: raw silk.  The ties I wear need to be versatile enough to be dressed down, but I love luxurious textiles — This is beautiful! What is that? Velvet? I definitely don’t want to be limited to knit or casual fabrics just because a tie on a girl is considered casual.  The texture of the raw silk immediately caught my eye — luxe, nubby, simultaneously shiny and matte — and I’m inclined to give the 7cm striped shantung ties by Drakes London a try with threadbare chambray, crisp dress shirts and everything in between. 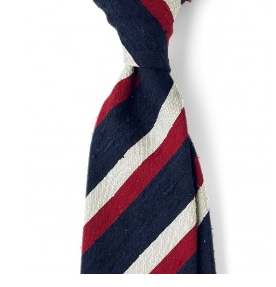 What’s around your neck this spring?

§ 4 Responses to One From The Boys: Silk in the Raw {also, My Tie Love Affair}

You are currently reading One From The Boys: Silk in the Raw {also, My Tie Love Affair} at Quite Continental.