In the May 21, 1945 issue of LIFE Magazine, an article called “The American Look” appeared alongside wonderful images by photographer Nina Leen.  Asserting that during WWII, US GIs had travelled the world and found the world’s women lacking in comparison to the “girls back home,” the article is a charming celebration of the fresh-scrubbed American girl, a wonderful look back at fashion and beauty in the 1940s and, of course, is a bit unintentionally funny to the modern eye.  For someone like me, a prep with a penchant for nostalgia, this article is a beautiful, inspiration-filled time capsule of womenswear. 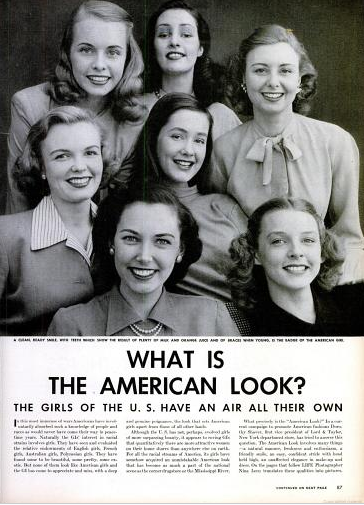 “In this most immense of wars Americans have involuntarily absorbed such a knowledge of people and races as would never come their way in peacetime years.  Naturally the GIs’ interest in racial strains involves girls.  They have seen and evaluated the relative endowments of English girls, French girls, Australian girls, Polynesian girls.  They have found some to be beautiful, some pretty, some exotic.  But none of them look like American girls and the GI has come to appreciate and miss, with a deep and genuine poignance, the look that sets American girls apart from those of all other lands.” 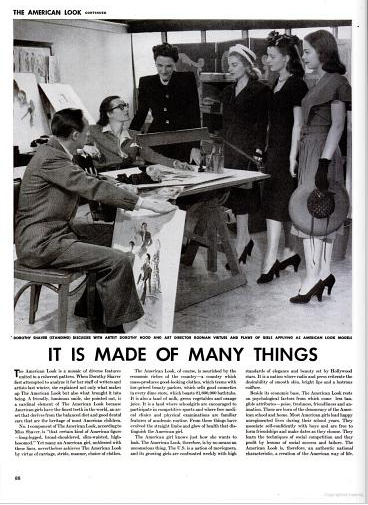 “A friendly, luminous smile…is a cardinal element of The American Look because American girls have the finest teeth in the world, an asset that derives from the balanced diet and good dental care that are the heritage of most American children.” 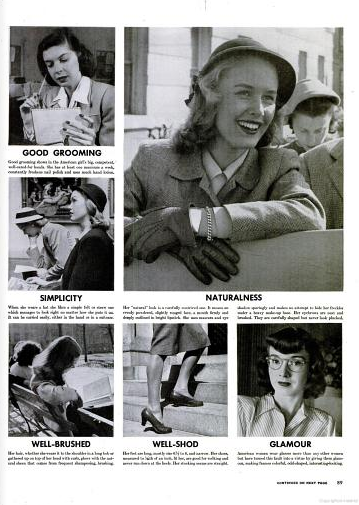 “GOOD GROOMING: Good grooming shows in the American girl’s big, competent, well-cared-for hands.  She has at least one manicure a week, constantly freshens nail polish and uses much hand lotion.”

“NATURALNESS: Her “natural” look is a carefully contrived one.  It means an evenly powdered, slightly rouged face, a mouth firmly and deeply outlined in bright lipstick.  She uses mascara and eye shadow sparingly and makes no attempt to hide her freckles under a heavy make-up base.  Her eyebrows are neat and brushed.  They are carefully shaped but never look plucked.” 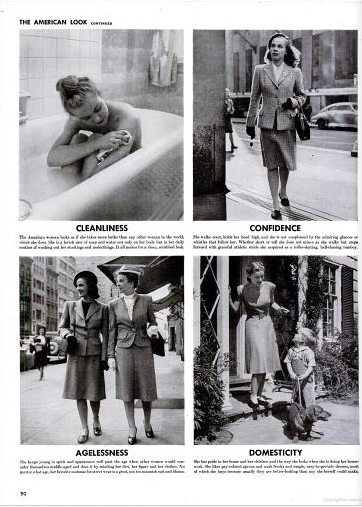 “CONFIDENCE: She walks erect, holds her head high, and she is not nonplussed by the admiring glances or whistles that follow her.  Whether short or tall she does not mince as she walks but steps forward with graceful athletic stride she acquired as a roller-skating, ball-chasing tomboy.”

“AGELESSNESS: She keeps young in spirit and appearance well past the age when other women would consider themselves middle-aged and does it by minding her diet, her figure and her clothes.  No matter what her age, her favorite costume for street wear is a good, not too mannish suit and blouse.” 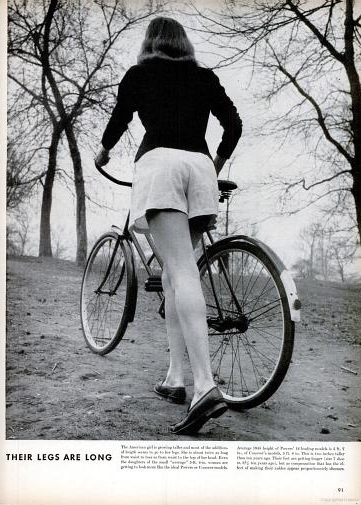 “THEIR LEGS ARE LONG: The American girl is growing taller and most of the additional length seems to go to her legs…Their feet are getting longer (size 7 shoe vs. 6 1/2 ten years ago), but as compensation that has the effect of making their ankles appear proportionally slimmer.”

Her penny loafers! J’adore! Even if she has big feet.

The article stands the test of time  and is ah-mazing — even if some of the ideas are more than a bit outdated at this point — mainly due to the beautiful photographs taken by Nina Leen.  Leen was one of the first female photographers for LIFE and is best known for her images of fashion, Americana and animals.  Luckily my dear, I was able to find a few additional images Leen took that did not make it into the article. 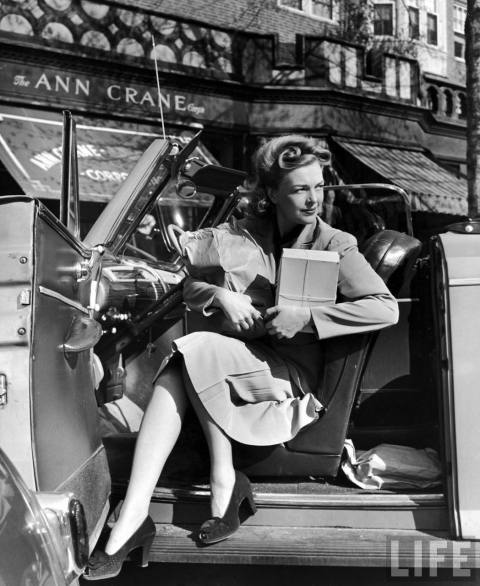 Une femme magnifique! I want this woman’s hair, her shoes, her car…
I’d even take whatever she’s got in those packages she carrying. 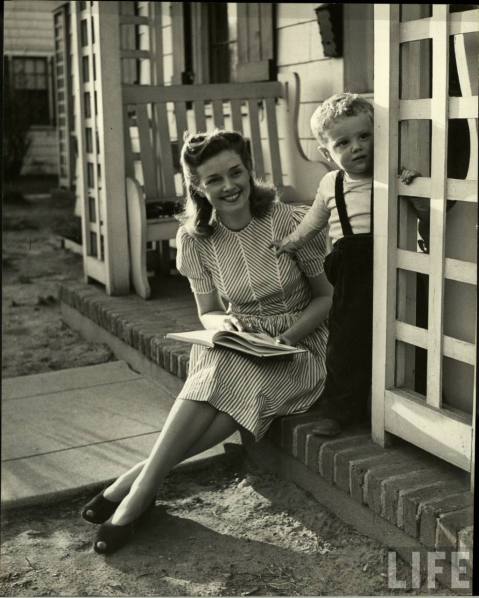 Aside from the adorable boy, I am swooning over her striped dress.
Do you not see the princess sleeve with the rickrack edge?  Parfait! 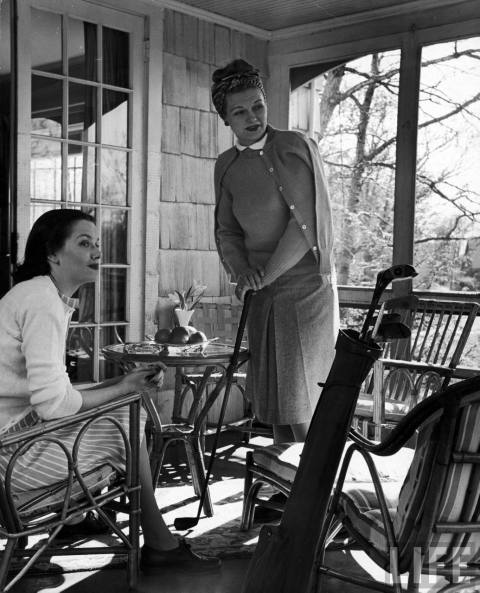 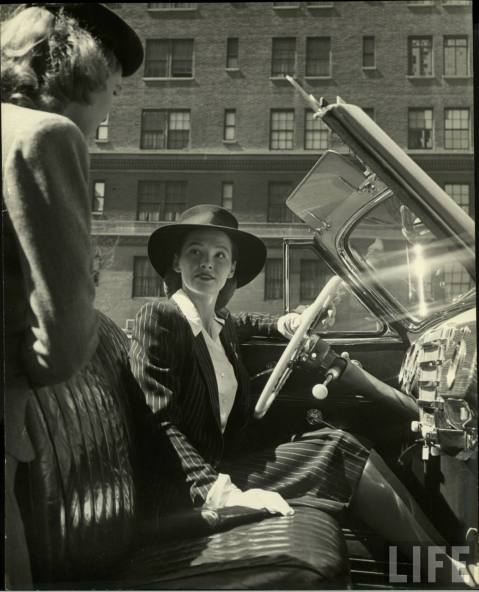 Even though this picture was taken in 1945, does she not still come off très élégante?  Is she not the picture of a “modern woman”?  Did you notice her darling driving gloves? 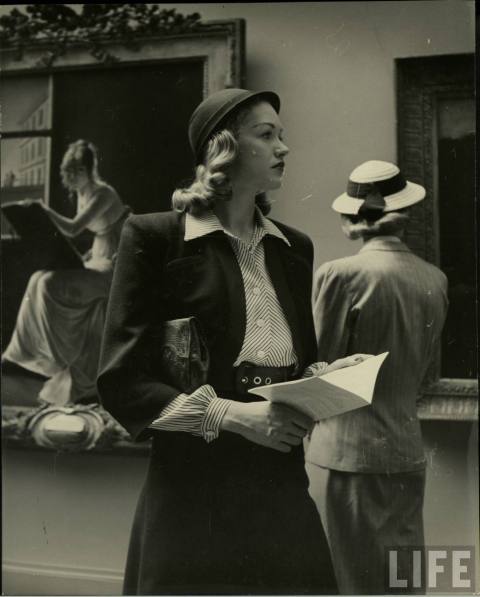 J’adore the high waist and the 3/4 sleeve of the suit, the stingy brim of the hat.
Her hair has me thinking of the iconic Veronica Lake.
(Before she changed her hair for safety, of course!) 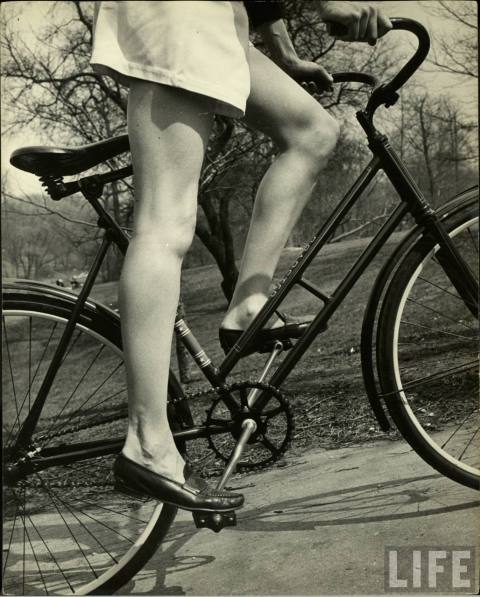 All images via LIFE.

A better look at the adorable shoes.
Do we think they are Bass Weejuns? 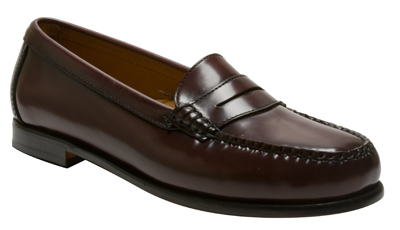 While at a uniform-required Catholic elementary school, I requested penny loafers specifically — even though all the other girls were wearing light-up LA Gear monstrosities.  My prep runs deep, cherie.  I think spring is a perfect occasion for a new pair.  If you are similarly inclined, do stick with the original: Bass Weejuns.  Virtually unchanged since Maine shoemaker G.H. Bass began making them in 1934, the shoe is iconic, well-made and will not break your precious piggy bank.

You are currently browsing entries tagged with Veronica Lake at Quite Continental.