Dude, serious girlcrush on the girl in front.
I want those mom jeans and her hat, like right. now.

With her debut Spring/Summer 2013 collection I became an instant fan of Marissa Webb. The former VP of womenswear design at J. Crew immediately caught my attention with her unexpected color pairings and smartly mixed textures, but it was her obvious talent for menswear-inspired tailoring that sealed the deal.  A self-described tomboy, Webb’s premiere offering held the exciting promise of lessons learned at the helm of a major national brand paired with a nuanced, yet ambitious, expression of the designer’s personal aesthetic.  The Marissa Webb woman is a city girl who was raised on — and still loves — classic, prep-infused styles, but she isn’t afraid of a little edge.  Or a lot of luxe.

Needless to say, I was very excited to see the Fall/Winter collection at Lincoln Center and it definitely did not disappoint.  The collection was very wearable and smartly tailored, and you can already sense a refining of Webb’s instincts as a solo designer — her keen ability to juxtapose unexpected elements has gotten even better.  High points included her outerwear and her blazers, both of which masterfully combined traditional textures with modern styles without any preciousness.  Webb also presented a high-waisted trouser and vest pairing that was remarkable, sort of like a three piece suit minus its jacket, in both windowpane wool and an ivory satin that made my inner Bianca Jagger jump for joy.  I was also happy to note that Webb decided to move into the realm of accessories, with Fall/Winter marking the debut appearance of an amazing footwear collection.  The banded pumps are calling my name rather loudly, can you hear them?

With her refreshing take on menswear-inspired style and the freedom to experiment as an independent designer, I am so excited to see how Marissa Webb continues to evolve.  I can’t imagine it will be too much longer before she’s everywhere.  I’ve also been keeping an eye on stockists since her her debut, and S/S just arrived at Barneys and her own e-commerce should be following soon.

You may recall we’ve discussed in the past my love for Veronica Beard, the womenswear collection helmed by two sisters-in-law with backgrounds in finance and fashion, both named Veronica Beard.  Stopping by their New York Fashion Week presentation, I was happy to confirm that the qualities that I noticed (and fell in love with) in earlier collections have become even more refined and nuanced, culminating in a luxuriously complex F/W 2013 that was heavily inspired by the pioneering spirit of the American West.

As far as presentations go (e.g., jostling for position in cramped quarters with harsh lighting and bored models) Veronica Beard was almost like a society event, a much-needed and cherished breath of fresh air during a very fast-paced week.  Upon entry at Bill’s Food & Drink — after waiting to check in behind Aerin Lauder, natch — we were greeted with flutes of champagne and small bites before heading upstairs to view the collection.  It was also my first time in the space since Bill’s Gay Nineties closed and Food & Drink opened in its place.  The update honors the spirit of the old watering hole while smoothing out some of the rougher edges with a bit of manufactured nostalgia.  While sticklers for authenticity who enjoyed Bill’s Gay Nineties probably won’t be satisfied with the changes, I believe it a very respectful refurb, indeed.

Staged among the gallery walls of the second floor, the models blended seamlessly among portraits of stately gentlemen and antique maps.  While the room was a bit full, I could tell from my very first glance that the Veronicas had put together something amazing.  Effortlessly blending masculine detail with feminine sensibility, the sumptuous textures of fur, silk and lace called to mind a woman with a maverick spirit and a taste for refined adventure, and with the collection’s saturated palette of reds, golds and greens, you could almost see her blazing her own trail through the untamed and wide open spaces of the west.

My personal favorites in the collection included the brick bi-color herringbone long and lean jacket with waxed canvas patches (shown above), the charcoal brushed tweed double breasted jacket with leather sleeves (on the model wearing the fedora below), and that gorgeous gold velvet lamé gown with its open back (shown last).  As Veronica Beard is a collection that grew up around a single blazer launched in 2010, I continue to believe that the tailoring is what the Veronicas do best, but with each collection they show all signs of the ability to truly do it all. 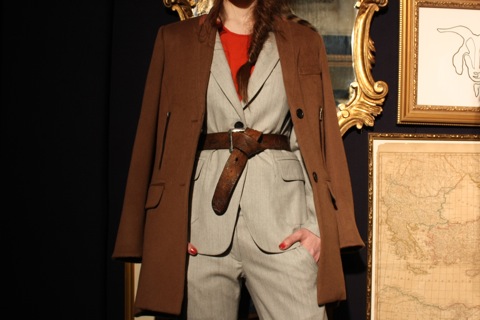 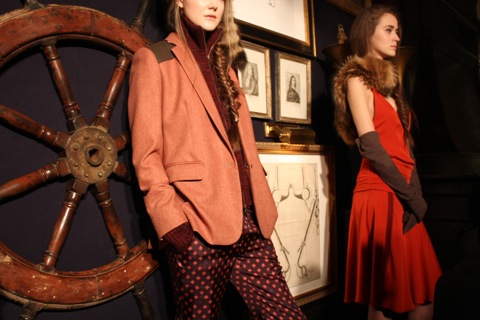 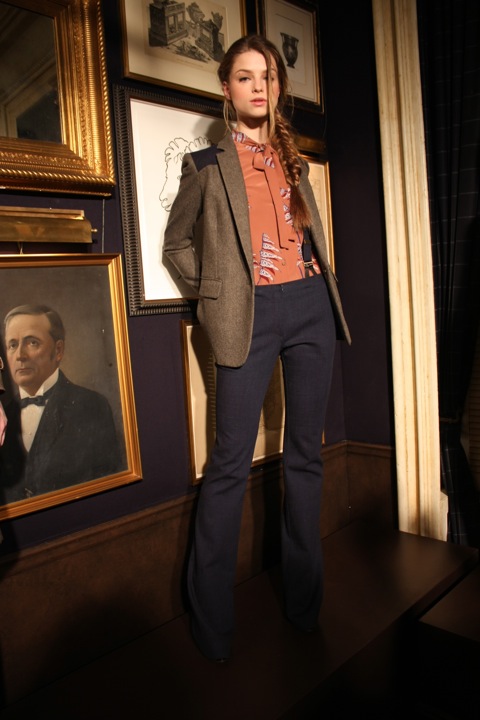 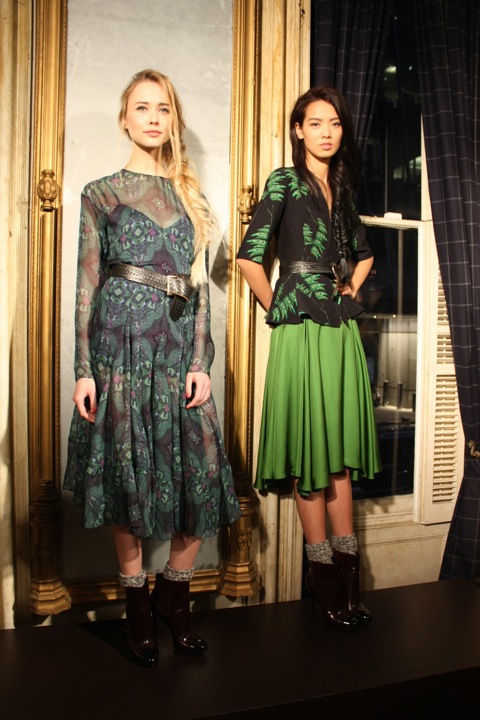 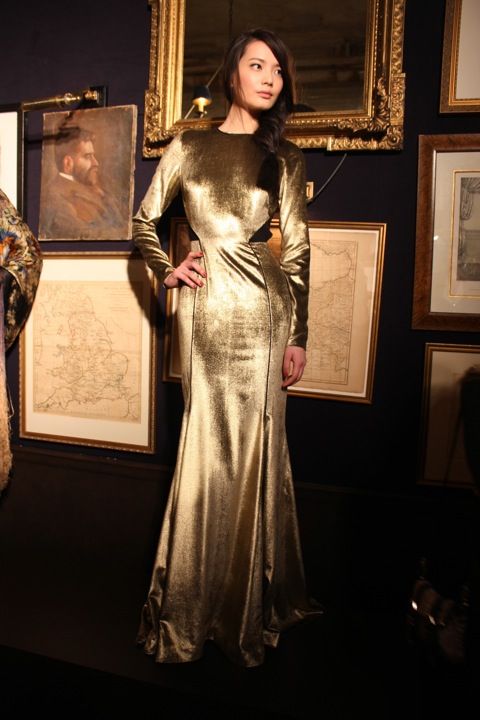 All images by Mariah Kunkel.

You are currently browsing entries tagged with womenswear at Quite Continental.