Now, when I say that I am originally from Los Angeles, it’s kind of like the geographic equivalent of rounding up to 10 from 7.  How so?  It’s because I actually spent the majority of my formative years in little place slightly to the north and west of Los Angeles proper, known to some of you simply as “The Valley.”  Yes, the location of the party where Tai took a shoe to the head and went on to roll with the homies.  Yes, the place that you have to thank for the “like” that permeates the vernacular.  Yes, the San Fernando Valley.  Like, oh my God.

Granted, The Valley is kind of like the red-headed stepchild of the Southern California family.  It’s not regarded as especially cool or interesting, but rather, frankly, as being kind of lame.  My mother, who was born and raised in Los Angeles, can’t even remember going there once as a child because, as she put it, “Why would you?”  Perhaps I wear my pride somewhat internally, but when it gets down to it, I have so much love for my Valley and the years I spent there.  I totally embrace my inner Valley Girl. 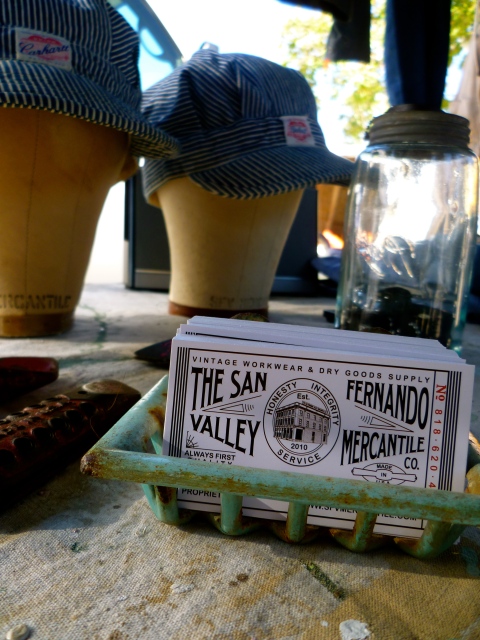 So you can imagine how happy I was a few months ago to discover The San Fernando Valley Mercantile Co., purveyors of fine vintage American-made workwear from 1930-1970 and handmade, utility-inspired dry goods/accessories.  And when I realized they had their own take on the classic tool bag, very much like those I had been admiring by a few other designers, but automatically and infinitely so much better because of its Valley origins, I might have geeked out a bit.  So of course, I shot off a note to learn more about their bags and the operation at large.

In short order, I received a lovely reply from Warren Schummer, the man behind San Fernando Mercantile Co., as well as Vintage Workwear, a blog focusing on vintage workwear from the 1940s through the 1970s.  It turned out Warren’s Valley roots were a bit more established than mine, as his go back three generations, and helped shape his addiction to workwear:

I grew up in the San Fernando Valley, particularly Sylmar in my youth, then left and spent a few years spent in Huntington Beach. Came back to Studio City for my teens and 20s, Sherman Oaks for the 30s and then to Tarzana in the west valley for the past 10 odd years, give or take.  My pops owned an auto body repair shop on Ventura Blvd in Studio City where he specialized in German cars including Porsche and Mercedes Benz cars in particular. That environment in addition to my Grandfather working at the now defunct Chevrolet plant in Van Nuys helped shape my love of work clothing.

Warren began collecting — actually, he called it “hoarding” — workwear and soon came to realize that the best way to support his collecting habit was by parting with some of his pieces.  This led to a stall at the Rose Bowl Flea Market (#3282), where he has been in residence for more than 18 months now, on the second Sunday of every month.  Warren also owns All Valley Handyman Service, which provides him with the opportunity to wear his vintage on the job.

Wanting to apply the inspiration he found in vintage to the creation of new merchandise, Warren began with a small run of work caps made from vintage fabrics, selvedge denim and brown duck, which did well.  With the success of the caps, bags were the obvious next step and a tote and tool bag-inspired bag soon followed.  Warren is intensely involved in the design and construction process, seemingly coming just short of sewing everything himself — which I think he probably would try to do, if he could.  All of San Fernando Valley Mercantile Co.’s merchandise is made in the USA, with most of it made in Southern California.

After hearing and loving all of this, I knew that I desperately wanted one of Warren’s bags and that I would definitely be stopping by stall #3282 on my upcoming (at the time) visit to the Rose Bowl Flea.  A few short weeks flew by and I found myself in the sweltering Pasadena sun at the Flea.  I dragged along Nick — of the rather awesome Tumblr No Secrets Between Sailors (and also Instagram: nosecretsbetweensailors) — and made him show me the ropes.

The San Fernando Valley Mercantile Co. was our first stop.  Nick and I had a good long visit with Warren and his lovely lady Michele, while taking shelter in the shade of the tent and slowly perusing an amazing selection of workwear merchandise.  We also discussed the specifics for one of his glorious 16″ bags that will be making its way to me in New York in the near future.  Of course you’ll receive the full rundown when it arrives.  Such a great afternoon. 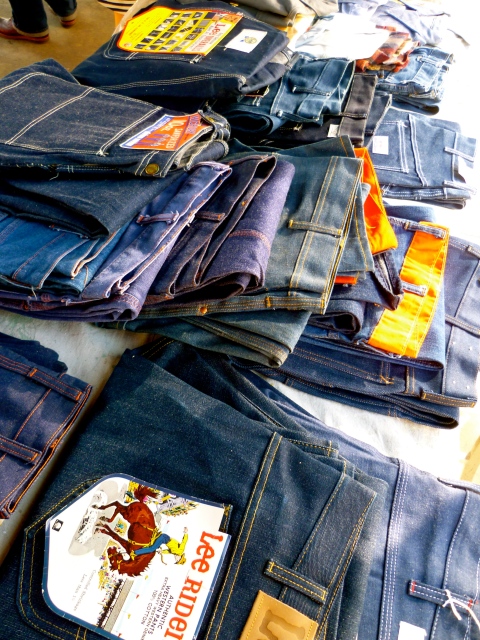 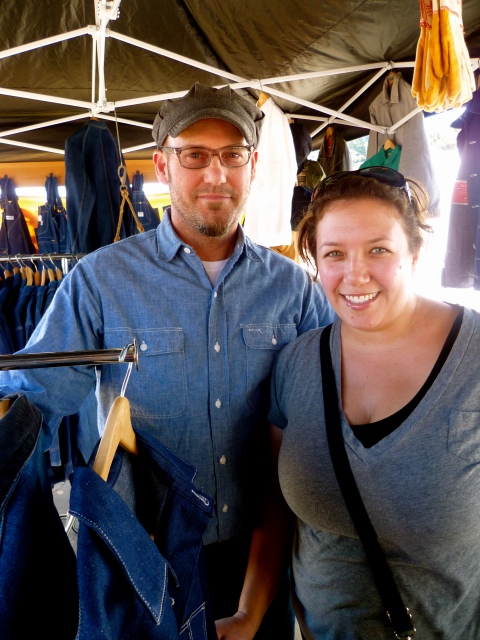 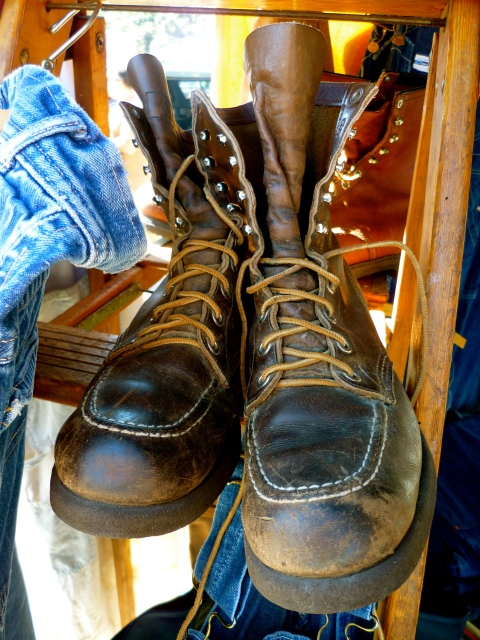 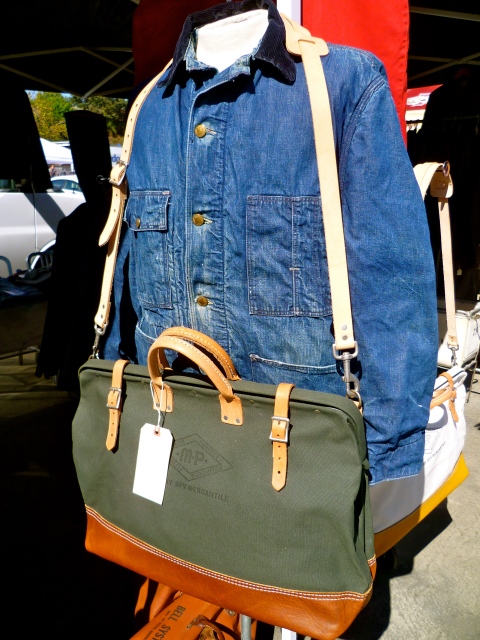 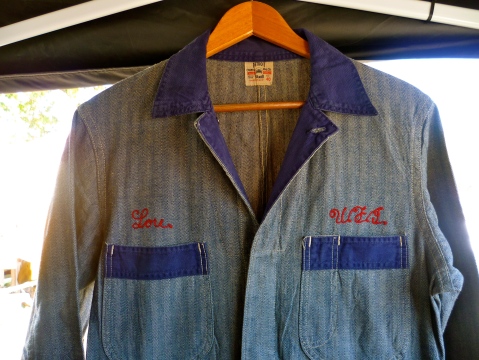 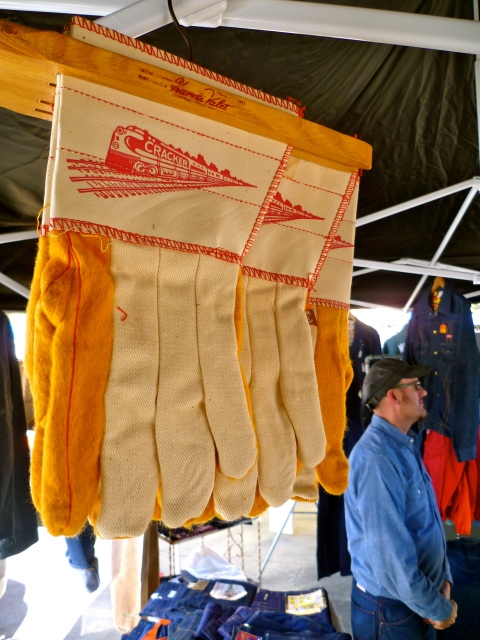 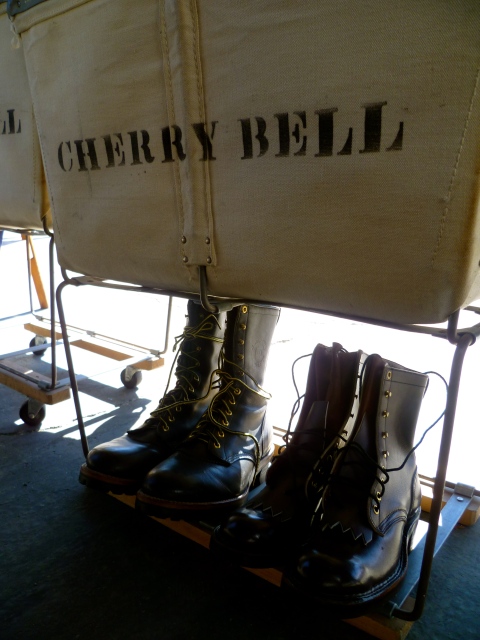 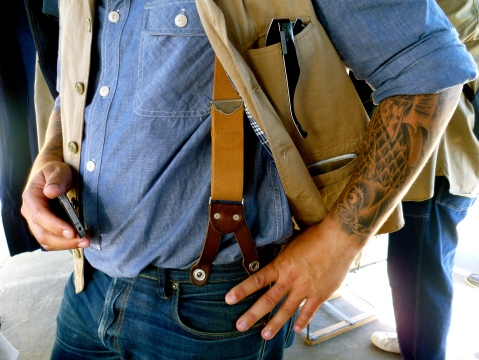 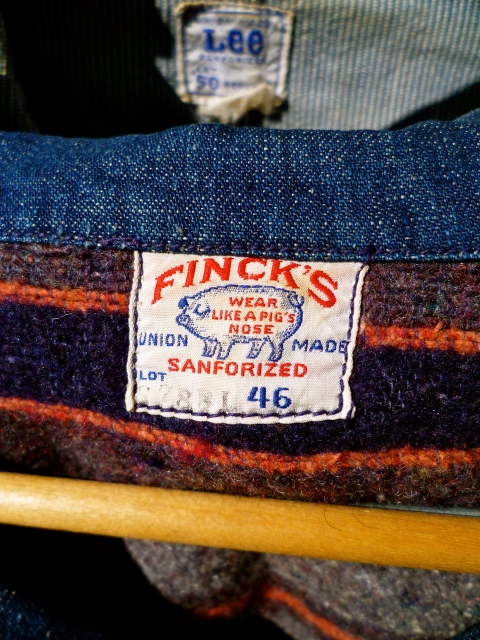 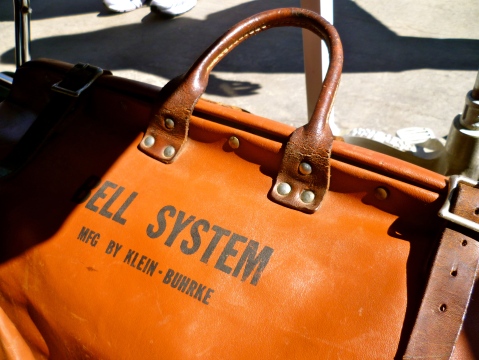 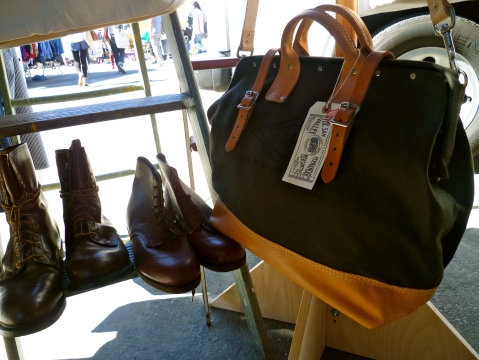 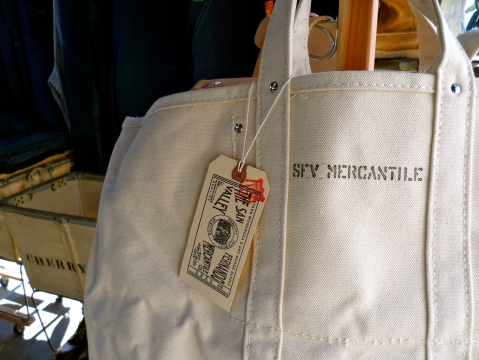 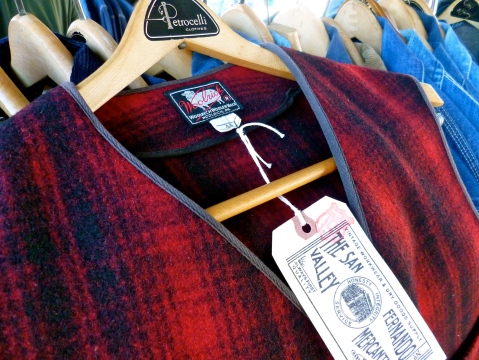 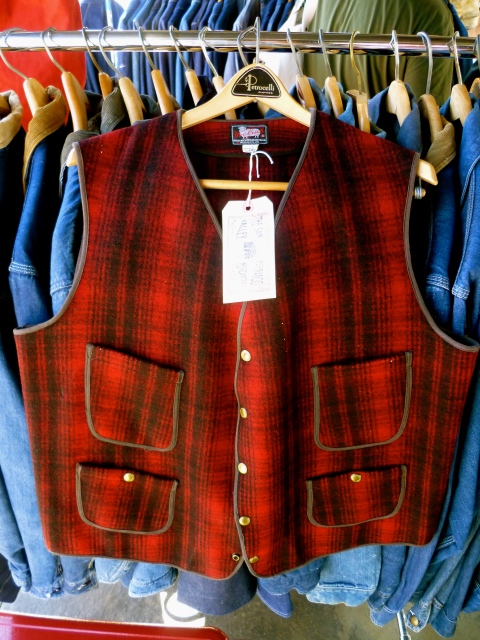 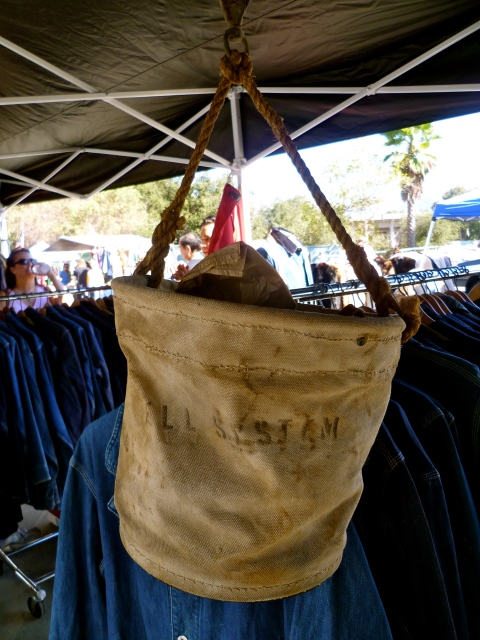 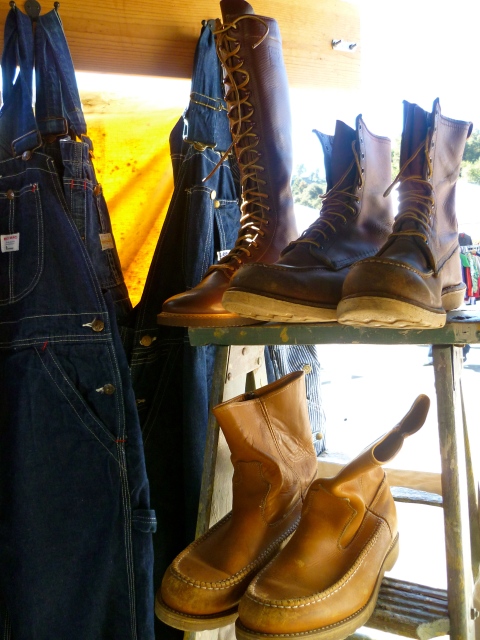 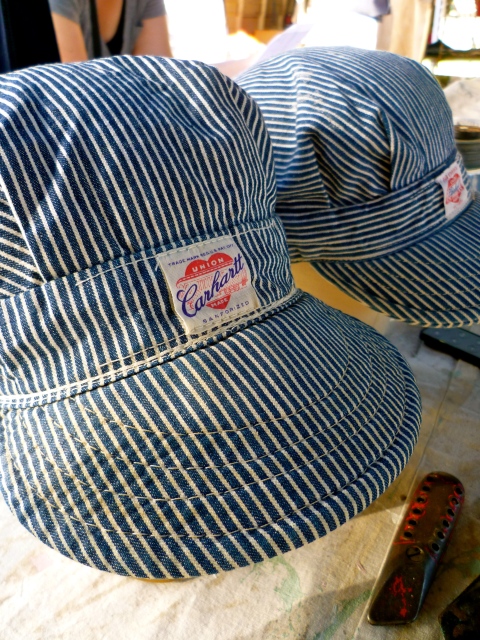 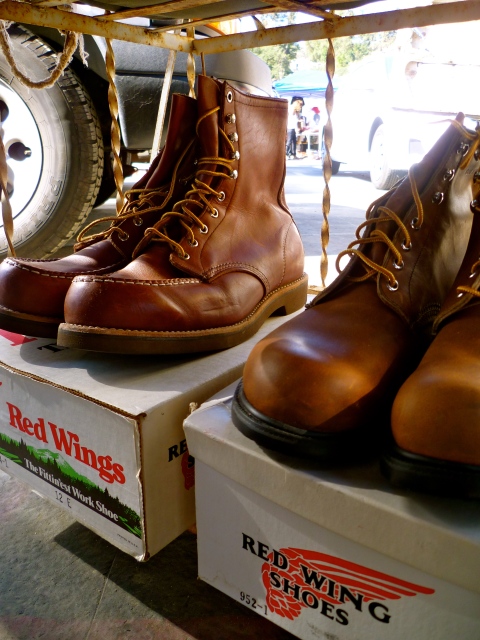 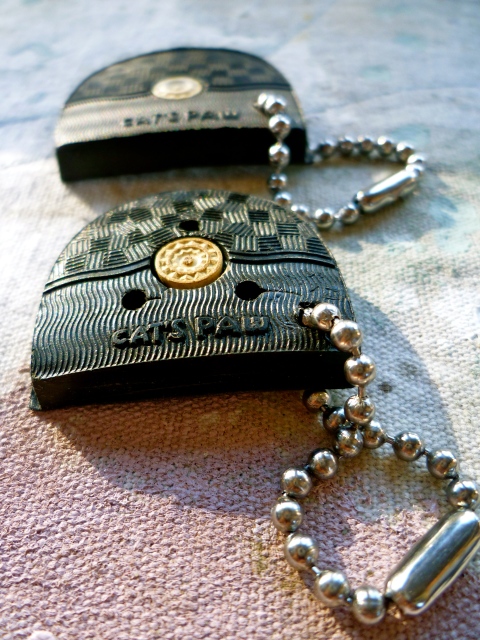 If you are at the Rose Bowl Flea, be sure not to miss the The San Fernando Valley Mercantile Co.  If you can’t make it out to Pasadena, check the shop out online, as well as the store blog, and the Vintage Workwear blog.

You are currently reading Field Notes: The San Fernando Valley Mercantile Co. at the Rose Bowl Flea at Quite Continental.