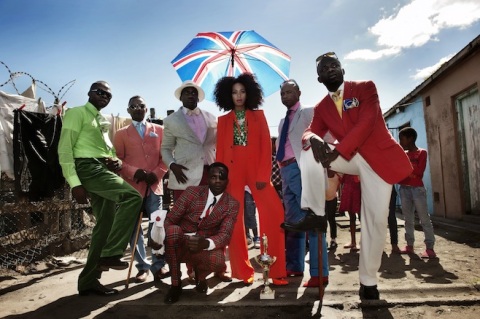 When it comes to the Knowles sisters, it shouldn’t surprise you that I’ve been a fan of big sister Beyoncé from the very start.  You just knew that those other – and oft rotated – Destiny’s Children weren’t long for this world, that B was itching for her Diana Ross moment in the spotlight.  Now, I definitely love me some divas, but you have to admit that there’s something sort of conventional (and maybe even a bit boring) about the establishment: big hair, red carpet beauty, belted ballads, an affinity for sparkles, etc.

Which is why I think Solange, the younger Knowles, is so much more interesting.  A frequent experimenter with her own personal style and something of a slowly burning girlcrush, Solange has officially evolved into the Knowles sister I’d much rather hang with.  She pretty much sealed the deal with her video for “Losing You,” which was brought to my attention by a good friend who noted that Solange appeared to be channeling me.  Shot in Cape Town, featuring some very dandy Sapeurs (an interesting group of men I mentioned awhile back), as well as a wardrobe that you know I fell in love with immediately, the synth-y groove of the song is almost like an added bonus.  I hope you enjoy it as much as I did.

§ One Response to Girlcrush || Solange in South Africa

You are currently reading Girlcrush || Solange in South Africa at Quite Continental.