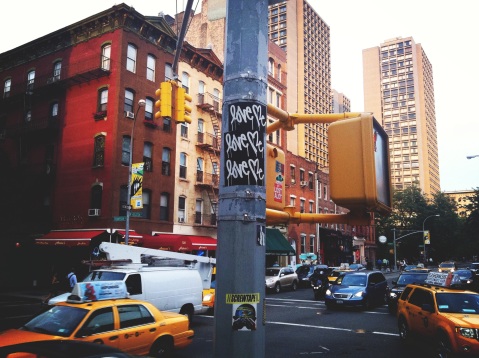 I was about halfway through the day before I realized that today marks the sixth anniversary since I landed in New York.  Six years.  It sort of crept up on me.  More than five years, but less than ten, the time seems to have accelerated in speed since year two (or so) and while I wasn’t looking I suppose I’ve become one of those seasoned “New York people” I marveled at when I first moved here.  People who understood the subways.  People who were surprised by nothing.  People who knew all sorts of interesting people and places in the city.  People who tossed off the numbers of years they’d lived in the city with nonchalance.

Yet, I’m not sure if I’m a New Yorker.  I still feel solidly connected to California and my roots out west, even though I’ve definitely settled into a rhythm within this busy, crazy, hectic city over time.  Establishing your relationship with this city demands time; it’s too much to take in and too much to experience, to rush the process.  Through it all, I’ve changed boyfriends, roommates, friends, colleagues, and jobs — but the city remains.  I’ve lived in places like Tribeca and Crown Heights and the Upper East Side and Murray Hill and Soho and the Financial District.  There are still entire neighborhoods I’ve yet to see or experience, while there are some I know like the back of my hand.  I’ve danced at nightclubs that no longer exist.  I know exactly where my preferred door on my preferred subway car will stop at both ends of my commute.  It’s almost like you come to an agreement with New York: you eke out a tiny portion of the city, you plant some roots, and if you work hard — and have a bit of luck — you flourish.

I’ve seen plenty of people come and go.  Some who predated me and decamped, declaring they’d “had enough” of it all — which to a newbie can sound almost impossible to fathom. Others arrive so full of hope and just can’t seem to make it work.  Still others are taken away by school or jobs or marriages.  While perhaps not as transient as Washington, DC, New York definitely maintains a sense of constant churn just below the surface.  People frequently reference how long they’ve lived here or worked there.  Transplants are constantly trying to figure out if they’re short-timers or in it for the long haul, while those born and bred in the city wear it as a badge.

I’ve always trusted in the assumption that when the time comes for me to leave, I will know it, innately.  But right now, this crazy life still feels right.  I still feel that thrill when I see the Chrysler Building at dusk.  I’m still excited for that first glimpse of the skyline whenever I return from being out of town.  The city still feels open, ripe for opportunity and adventure.  While I don’t know what chapter of this story this might be, I know we haven’t quite reached the end…

§ One Response to My New York-aversary

You are currently reading My New York-aversary at Quite Continental.