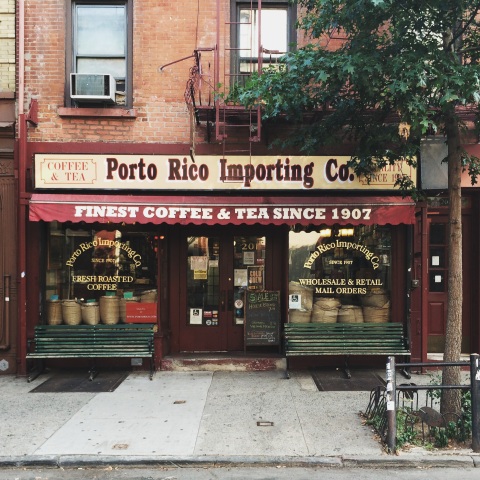 Every morning on my way to the train at the West 4th Street station, I pass the Porto Rico Importing Co. at 201 Bleecker Street in Greenwich Village.  More of a coffee and tea store than a true coffee bar, it’s where I buy the coffee I use at home (try it out: Monsoon Malabar is my favorite).  It’s usually full of bench sitters and the usual bunch of parked cars, but today I happened upon a rare moment of quiet and a break in the traffic so that I could take the shot above.

As I took the picture, an eccentric-looking older gentleman ambled by and gruffly offered his two cents: “You know, places like that are disappearing around here.”  He then proceeded to point out the growing vacancies around Porto Rico, both new and old. I readily agreed with him and he eventually set off on his way down Bleecker, satisfied.

Vaguely familiar that Porto Rico has been around for some time — it does mention something about 1907 on the awning, at least — I did a bit of research and discovered that the ground floor of 201 Bleecker has been operated by the Longo family since the early 1900s, initially as a bakery and then later as the coffee and tea store we know today.  The current owner-operator, Peter Longo, is the third generation to run the store, the building having been bought by his grandfather in 1905 for $5,000.  Peter was born in the building, as well as his father before him.

For someone who’s only lived in the neighborhood for just over a year, it’s always exciting to learn more about longtime residents and businesses, but also to hear how the streets have changed.  The next time you find yourself on Bleecker, I definitely recommend that you stop by for a pound of coffee or perhaps a new tea — because it’s true, places like this are rapidly disappearing these days.

For a fuller story on Porto Rico, Alex Witchel at the NY Times wrote a great article on Peter and the store that you should also read.

§ One Response to Disappearing Acts

You are currently reading Disappearing Acts at Quite Continental.