Grand staircase of the Titanic. Image via Retronaut.

I have a mild obsession with Titanic — the historical event much more so than the Cameron film, but I’m not going to even try to pretend like I didn’t make my high school boyfriend sit through that 3 hour extravaganza — twice.**   And so, I’ve put together a roundup Reading List in honor of the 100th anniversary of the Titanic disaster; the concurrent 15th anniversary and 3D release of the 1997 James Cameron film; and the people who didn’t realize Titanic was real, not just a movie:

Titanic Guide to New York City Part 1 & Part 2 {via Scouting New York} — top it off with a stay at The Jane Hotel, where the survivors stayed 100 years ago {via Designtripper}

Seven Famous People Who Missed the Titanic {via Smithsonian.com}

Guernsey’s and Bonhams both auction off Titanic artifacts this week.  View selected items {via Artinfo}

Fashion and ephemera salvaged from the deep: On the Titanic, Defined by What They Wore {via NY Times}

Every *MAN* for himself: Researchers say male chivalry on sinking ships is a myth {via Washington Post}

Remastering Rose and Jack: Converting Titanic to 3D with a cool infographic {via NY Times}, but if you happen to be in China, don’t get all excited about Rose’s 3D boobs {via LA Times} 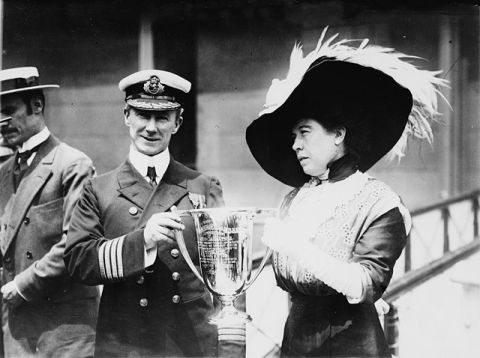 Unsinkable Molly Brown presenting a loving cup to Captain Arthur Rostron, master of the RMS Carpathia, the ocean liner that rescued the survivors from the Titanic.  Image via the Library of Congress.

**and I may have gotten the tiniest of lumps in my throat upon my first viewing of the 3D trailer in the theatre.  Don’t you judge me!  I was young and impressionable!

You are currently reading Reading List || The Titanic Edition at Quite Continental.